How to spot and react to youth sports concussions

As news and awareness of concussions spreads, it’s hard not to worry about the risks from sports activities. This is especially true with younger athletes.

The commonly accepted definition of concussion is a blow or jolt to the health that disrupts the function of the brain. It’s also called a minor traumatic brain injury and often results from a car crash, fall, or sports injury. An estimated one in five high school athletes will sustain a sports concussion during the season. Football is the highest concussion risk sport for males, with 11.2 reported among 10,000 “athletic exposures” at practices and games, according to a report in The New York Times. Soccer is the highest risk concussion sport for females, with 6.7 per 10,000 athletic exposures. 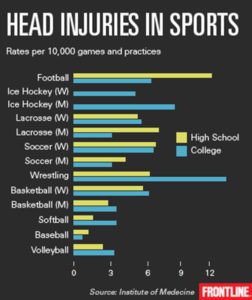 As the new school year approaches and pre-season practices launch, it’s important to educate parents and players about concussions.

Tips for preventing concussions include:

Even after preventative actions are taken, the risk for concussions remains. So it’s important your child understand the importance of reporting symptoms to an adult. The most commonly reported concussion symptoms are:

In many cases athletes are concerned about losing a spot on the team, jeopardizing a future sports career, looking week, or letting teammates down. Talking with your child about the severity of concussions can help them understand when to report symptoms.

As long as your child didn’t lose consciousness and isn’t vomiting, it’s OK to proceed to urgent care (instead of an emergency room) for a suspected concussion. And it’s important to get treatment because otherwise the injury could result in long-term brain damage and increase the risk for dementia.